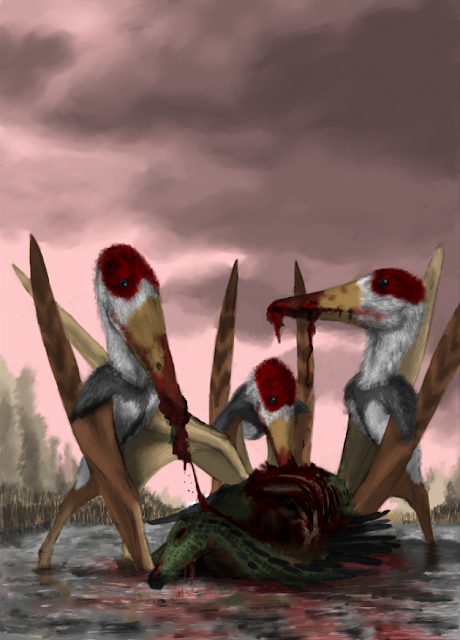 Excellent painting of two Istiodactylus feeding on the remains of a stegosaur, by paleoartist Mark P. Witton.

(Notice: I had originally written this article for use on the upcoming Fortean Slip podcast which is hosted by Christopher York and Steve Alcorn. I decided to share it here also for the benefit of viewers, as pterosaurs are an interesting group of animals which definitely fit into the realm of bizarre zoology. I have also been meaning to post more articles on paleontological topics, so here is one which I wrote referencing an excellent article by paleoartist Mark Witton.)

Surely if you've seen dinosaur-themed movies such as Jurassic Park then you have heard of pterosaurs. Although these strange creatures are often the sinister "villains" of such media, recent discoveries have revealed that many of the portrayed characteristics are incorrect and have shined light on the true appearance of these bizarre prehistoric reptiles. Pterosaurs were archosaurian reptiles which lived throughout the Mesozoic era, a period of time starting 250 million years ago and ending 65 million years ago. These animals possessed wings with membranes which were supported by a single finger and ranged in size from wingspans of 10 inches to 10 meters, with some species growing as tall as giraffes! However, as mentioned before, there are many inaccuracies regarding these interesting prehistoric animals often spread in movies and other media sources. Rather than being unsuccessful prehistoric equivalents of modern day seabirds, fossil evidence suggests that pterosaurs were a diverse group of reptiles which inhabited a variety of niches. Interestingly, many paleontologists suggest that a group of pterosaurs known as the azhdarchids may have stalked small animals (possibly even juvenile dinosaurs) on the ground like giant, reptilian storks! Pterosaurs were not the scrawny or leathery-skinned monsters depicted in many popular films, but were actually covered in hair-like fuzz which suggests that they were likely warm blooded. These flying reptiles did not struggle to takeoff from the ground, which would put themselves at constant risk to predators such as theropod dinosaurs, but likely launched themselves efficiently using all four legs and their powerful muscles which allowed them to leap off flat ground without assistance of cliffs or wind. Although many inaccuracies regarding these amazing prehistoric animals have been corrected, scientists still have many questions as to what their lifestyles and intermediate ancestors were like. Hopefully, with further research by devoted paleontologists and other scientists, some of the many questions regarding these bizarre Mesozoic reptiles may be answered. To read more about discoveries on the likely appearance and lifestyle of pterosaurs, click this link: Why pterosaurs weren't so scary after all﻿ 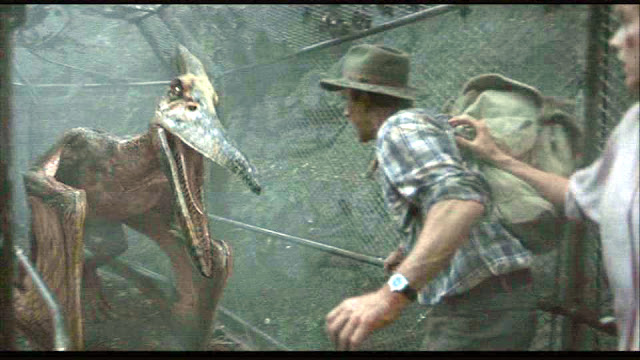 A likely inaccurate depiction of a leathery and rather demonic-looking Pteranodon from Jurassic Park III.