A study was recently released through the scientific paper Nature, which details an interesting discovery regarding the behavior and lifestyle our closest extinct relatives. A team of researchers from the United States and Australia announced in the paper that they have gained the ability to calculate when Neanderthal juveniles began weaning (to become accustomed to a diet other than a mother's milk) through examination of fossil teeth. Intriguingly, this new examination technique was partially based off of information from studies of modern Homo sapiens and monkey teeth. By examining the traces of barium in the tooth, which can help determine when a primate had an exclusive diet of milk and when it began and completed the weaning process, the researchers were able to determine that juvenile Neanderthals stopped having a milk exclusive diet after seven months. This pattern of seven months of an exclusive milk diet and seven months of a supplementation diet away from milk is intriguingly similar to that of modern day Homo sapiens, thus revealing more similarities between Neanderthals and our own species. To read more about this extremely interesting breakthrough in Neanderthal research and the techniques which were used to accomplish it, click the link below:
Monkey teeth help reveal Neanderthal weaning
Posted by Jay Cooney at 8:05 PM No comments:

The fossils of a new species of icthyosaur, a fast swimming and likely warm blooded species of dolphin-shaped marine reptile, found in Iraq have changed the view of paleontologists on these peculiar animals. Prior to this discovery, it was generally thought that a series of extinction events during the Jurassic period had caused this group to eventually die out and lessen in diversity. However, the partial skeleton of this new species named Malawania anachronus supports the existence of a previously unknown lineage of Cretaceous ichthyosaurs. An extremely interesting detail of this discovery is that Malawania appears to be a member of an icthyosaur lineage which was thought to have gone extinct during the Jurassic period, making it an ancient example of a 'living fossil'. The typical textbook definition of a 'living fossil' is an organism that has remained essentially unchanged from earlier geologic times and whose close relatives are usually extinct. Thus, the discovery of Malawania as an archaic relict of a lineage of Jurassic icthyosaurs demonstrates that these marine reptiles were likely still diverse during the early Cretaceous, which further adds to the importance of this amazing discovery. To read more about this intriguing fossil discovery, click the link below:
Fossil saved from mule track revolutionizes understanding of ancient dolphin-like marine reptile
Also read this article by paleozoologist Dr. Darren Naish, who was a coauthor on the paper which detailed the discovery of this bizarre reptile. It delves even further into the events which lead up to this discovery and why it is so important:
http://blogs.scientificamerican.com/tetrapod-zoology/2013/05/14/malawania-from-iraq/ 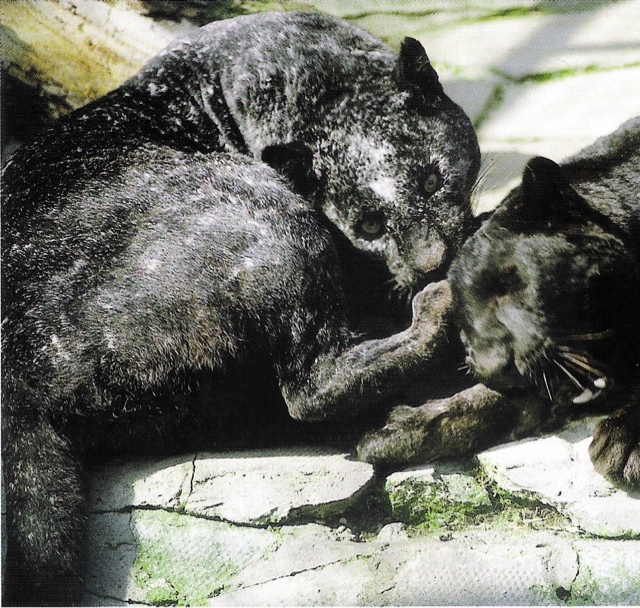 This article by zoologist Dr. Karl Shuker is about a strange and extraordinary looking black panther which lived at the Glasgow Zoo. This black panther had a strange feature which was a "sprinkling" of white hairs among its black pelt. The origin of this bizarre feature remained a mystery for years, and it has only been documented in one other captive black panther. Please click on the link below to read more about this interesting feline event.
ShukerNature: COBWEB PANTHERS - A SILVERED SURPRISE 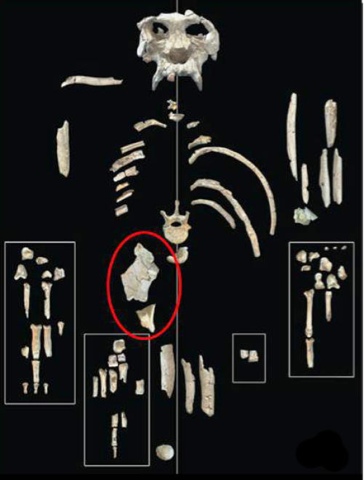 A species of ancient great ape which lived in Spain was recently unearthed and named Pierolapithecus catalaunicus. Pierolapithecus catalaunicus lived approximately 11.9 million years ago, and scientists have announced that it was possibly the last common ancestor of the modern great ape species (chimpanzees, gorillas, bonobos, orangutans, and humans). A recent examination of this ape's pelvis bone by an anatomy expert now suggests that it had intriguing features which give clues as to the evolution of modern great apes. Please read this article for more information on this exciting discovery:
Fossil of great ape sheds light on evolution
Posted by Jay Cooney at 6:29 PM No comments: