I just spent a great weekend (February 15, 16, and 17) at the outdoors outfitter known as Cabela's in West Virginia. The event that I attended was the Cabela's Strange, Rare and Unusual Sightings Seminar. This event had presentations by Dr. Jeffrey Meldrum (professor of physical anthropology at Idaho State University), Billy Williard (director of Sasquatch Watch of Virginia), Eric Altman (senior director of the Pennsylvania Bigfoot Society), David Dragosin (Western director of the Pennsylvania Bigfoot Society), and Stan Gordon (Bigfoot and paranormal researcher). This event was sponsored by Cabela's, and I would like to give a big thank you to them (and Bud Forte, especially) for making this great weekend possible.

The theme of the seminar was to examine reports of strange or unidentifiable animals that people have seen in the woods with scientific minds, instead of speculation or subjective opinions. I was very compelled by this, as I feel that we really need to start using more scientific methods in the search for animals that are unidentified yet reported. Below are some images that were shown prior to the presentations. The first images are from a sequence of trail camera photographs from West Virginia which seem to show a large felid. It has been suggested that these photographs show an Eastern Cougar (Puma concolor couguar), a felid that is supposed to be extinct in West Virginia and other parts of the Eastern United States. Size comparisons were able to be made, and it does seem to be a decently large felid.

The next images are, in my opinion, much more intriguing. They are not of an unidentifiable species, but rather a known felid that appears to be abnormally large. They clearly show a Bobcat (Lynx rufus) that is of a rather incredible size. This animal was trapped in West Virginia and allegedly weighed 63 pounds. If this is an accurate weight, then this is a record bobcat. Please note that the trapper's arms are bent (and not extended fully), meaning that forced perspective accounting for the animal's apparent large size is unlikely. 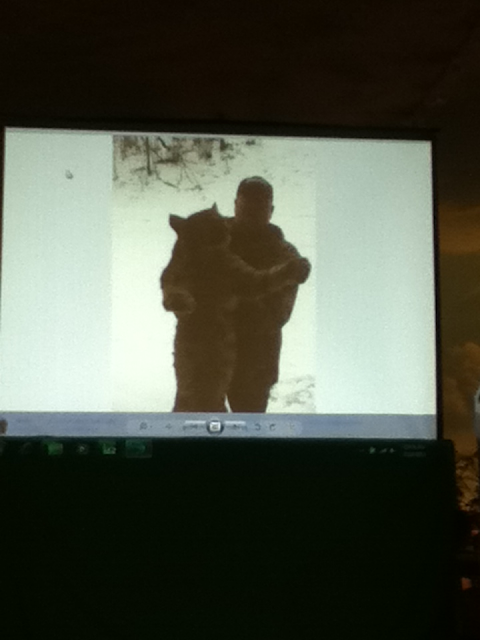 I was able to talk to many great and kind people at this seminar such as Eric Altman, Billy Willard, Sharon Lee, and Bruce Harrington (I was not able to speak directly to Mr. Gordon or Mr. Dragosin, although I am sure that they are great people). The highlight of my weekend, however, was speaking to Dr. Jeffrey Meldrum. Dr. Meldrum (a professor of physical anthropolgy at ISU) was an extremely knowledgeable person and was far more friendly and welcoming than I had expected. He is truly a great person, and was clearly willing to answer each of the many questions that he had received to the best of his ability. He is also a great inspiration to me.

In these speeches, Dr. Meldrum covered some extremely interesting topics. He looks at the evidence and reports of Sasquatch with a very professional, academic, and scientific approach. I must say that I (and my dad, who had been very skeptical of the existence of these animals) left convinced more than ever that a species of unidscovered ape is in North America. In this article, I would just like to briefly cover some of the information that was in Dr. Meldrum's speech as you may learn more.
In both of his presentations, Dr. Meldrum addressed the question of why there haven't been Sasquatch physical remains discovered yet. I was very glad that he so heavily explained this, as lack of physical remains has been bothersome to me. The main answer that he had was that nature is very well equipped to recycle materials in very little time. Since Sasquatch are likely a species of large ape which have a very long lifespan (50 years minimum), reproduce infrequently, and are the top predator with no natural enemies, then death (which would be of natural causes) would be very rare. When top predators are dying, they hide in secluded areas which allow scavengers and decomposers to break down the body. The remains which are not consumed by scavengers and decomposers are broken down by the acidic soil of the wet coniferous forests in which they inhabit. A parallel to other animals that can be made is that even though up to 30,000 black bear live in West Virginia, hunters never find dead bear remains. Dr. Meldrum said that this number is six to eight times the population that he would allow for Sasquatch. In one of his presentations, Dr. Meldrum also talked about a project where time lapse cameras filmed an elephant carcass as it decomposed. The carcass was completely consumed by scavengers within only 6 days, meaning that a giant ape carcass would likely be consumed even faster.
Dr. Meldrum also addressed the commonly asked question of why there are not definitive trail camera images of Sasquatch. He said that as trail cameras have grown more popular, certain predatory animals such as coyotes and cougars are exhibiting avoidance to trail cameras. This may be due to infrared leakage, EM emissions, human scent, or the novelty of a unnatural object on a commonly travelled game trail. Dr. Meldrum argues that if a coyote and cougar notices the presence of a trail camera, an intelligent primate like a Sasquatch would likely avoid these. Dr. Meldrum also said that there have been instances where he and others have hiked into remote wilderness areas for days to deploy trail cameras, and (upon retrieval) have found the case snapped open and the camera pulled loose. Although he said that he is not sure of what animal did this, he pointed out that they had not seen any other humans for a month and that a bear would have simply chewed the trail camera.

Another very interesting part of Dr. Meldrum's presentation was when he spoke about the Patterson Film. Something that I found very intriguing was that the animal in the film has a skull adapted for heavy chewing (durophagy) with large zygomatic arches and a flat face, rather than a skull that has a more protruding face like a gorilla. In designing a suit that is supposed to look like a giant ape, Patterson would have likely turned to King Kong and the gorilla. Instead, the animal in the film has a skull that is totally unlike that of a gorilla and is actually more like the skull of a Paranthropus (which was not a known fossil species at that time).


Dr. Meldrum also pointed out that the feet of the animal in the Patterson Film would be extremely hard to fake as they show more flexibility than a human foot (allowed by the midtarsal break) and
also show dorsiflexion in the toes. Four way stretch fabric didn't exist in 1960's costumes, and the costume feet of that time were floppy and obviously artificial. Dr. Meldrum also told my father and I that in one part of the Patterson Film, the animal missteps onto hard ground which sends shock waves up through her body and shook the adipose (fatty tissue) of her breasts. More details about this and other reportedly exciting details of the Patterson Film (which is being analyzed by Bill Munns) will be released in the near future.
This was a very interesting and enjoyable seminar where I met many nice people. One person I met already knew about my blog, which is very exciting for me! Once again, I would like to thank Cabela's and Bud Forte for making this great weekend seminar possible. I have certainly learned more, and have come back convinced more than ever that a species of undiscovered bipedal ape exists in North America.
Posted by Jay Cooney at 4:52 AM