(Part 4 can be found here)
In this, the final installment of the Hagan Carcass Comparison Series, I will review two possible hypotheses which I have formulated after researching possible identities for the enigmatic carcass reported by Ms. Julie Hagan. The first hypothesis involves a scenario of misidentification: the carcass being that of a known species. Commenters have suggested a wide variety of animal species which could have been misidentified in this case, from oddly decomposed sturgeons to false catsharks. While many aspects of sturgeon morphology are in disagreement with those described for the Hagan Carcass, false catsharks can grow to a length of ten feet and can have a similar appearance to the carcass with their wide angular heads and other body features1. These sharks are also rare deep-water fish1, and thus would likely not be identified by the average person if found swollen and slightly decomposed on shore.﻿﻿

Merry Christmas and a Happy New Year to all the greatly appreciated viewers of this blog! Thanks to you, I have achieved a successful tally of over 100,000 views since November of 2012! I had never thought that this blog would go so far in that amount of time, so thank you for helping my dream become a reality. Have a great time with family and friends, and please pray for those who are less fortunate.
Also, and this was a last minute creation, Merry Christmas from the festive merhorse! 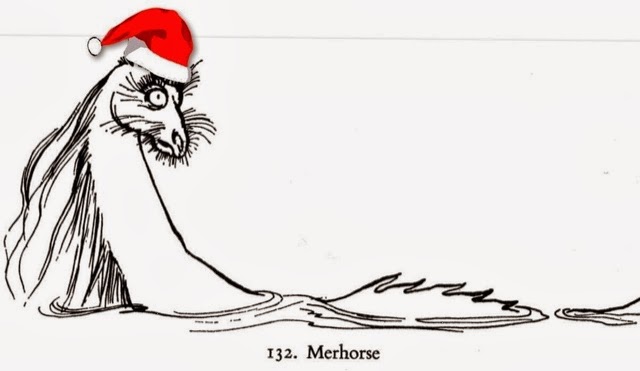 The discovery of the largest new terrestrial mammal species since the Vu Quang Ox (found in 1992) was just announced this past Monday. This breaking finding involved a new species of tapir being discovered in Brazil and Colombia by a team of scientists which had been investigating reports of the animal by local indigenous tribes since ten years ago. The description of the previously unknown perissodactyl named Tapirus kabomani, or the Kabomani tapir, has been published in the Journal of Mammology with the lead author being paleontologist Mario Cozzuol. The Kabomani tapir is regularly hunted by the Karitiana tribe and lives in open grasslands and rainforests. In comparison to its closest relative, the Brazilian tapir, the Kabomani tapir weighs around 110 kilograms and has darker hair, shorter legs, a distinctly-shaped skull, and a less prominent crest. Genetic research conducted by the authors shows that the Kabomani tapir and Brazilian tapir separated around 300,000 years ago, and it has been hypothesized that the species may have evolved during dry periods of the Pleistocene which were associated with forest fragmentation. While the discovery of this new member of the modern megafauna is exciting in itself, details of how the discovery of this animal came to be make it even more compelling.
Read more »
Posted by Jay Cooney at 8:45 PM 4 comments:

Scott Mardis recently posted the preceding comparative image on Facebook, and I thought that it was thought-provoking enough to be shared here. The paste-up compares features of the animal allegedly seen at Loch Ness in 1934 by Patrick Grant (at upper left), the long-necked and maned "sea giraffe" reported by the second officer of the H.M.S. Corinthian (at upper right), a drawing of a mata mata turtle (at lower left), and Scott's drawing depicting a possible appearance of the skull-crested plesiosaur known as Umoonasaurus (at lower right). The barbels of the mata mata, the 'beard' of the Patrick Grant animal, and the whiskers/beard of the Corinthian 'sea serpent' are compared in this image. The tubercles of the mata mata, 'horns' of the Patrick Grant animal, 'ears' of the Corinthian 'sea serpent', and crest-ridges of the Umoonasaurus are also compared in the image. The aforementioned aspect of the comparison is what will be focused upon in this article.