1994 Observation of An Unknown, Leatherback Turtle-Like Animal At Lake Champlain

I have been in correspondence with fellow cryptozoological researcher Scott Mardis for a long time now, and I consider him a sort of mentor in the field of study regarding unknown aquatic animal reports. In past conversation which I have had with him, Scott has made mention of his own encounter with a possible unknown aquatic animal in Lake Champlain. Intrigued that the great longneck-sleuth himself had possibly observed an individual of the species behind sightings of Lake Champlain "monsters" and other unknown aquatic animals around the world, I had hoped to gain further details on the sighting someday. Finally, Scott has created a report form in which he has shared the details of his sighting. This has been reproduced here, with the appertaining text in bold.


Lake Champlain "Monster" Sighting Report by Scott Mardis
The date I believe was July 9, 1994 and I was at the waterfront park called Battery Park in Burlington, Vermont on Lake Champlain, purposely watching the water for something with my binoculars (I did not own a camera at the time and could not afford one, as I had recently spent most of my money relocating to Burlington to investigate the "monster"). I had been watching the lake for weeks on a regular basis from this park as it was easy to access and had a wide view of one of the deepest parts of the lake. The park was sparsely occupied at the time and I was sitting on one of the benches facing the water. Around 11 a.m., a large object bobbed to the surface and remained stationary for a few seconds. It was very far out into the water but I had a good view of it with my binoculars. I later estimated it’s size by comparing it with a boat I saw afterward. I believe it was about 15 feet long and about 4 feet high. 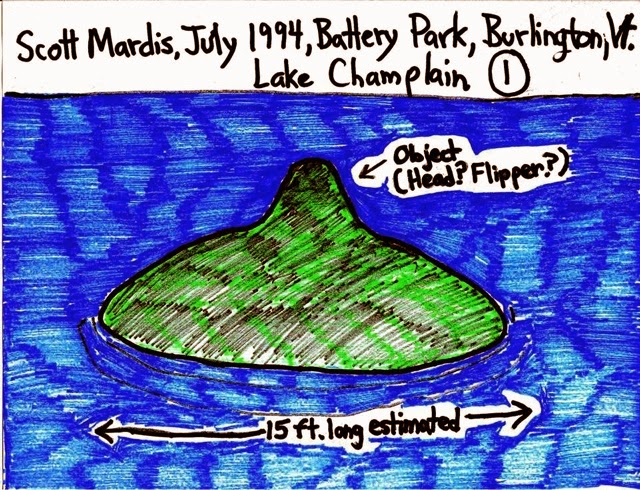 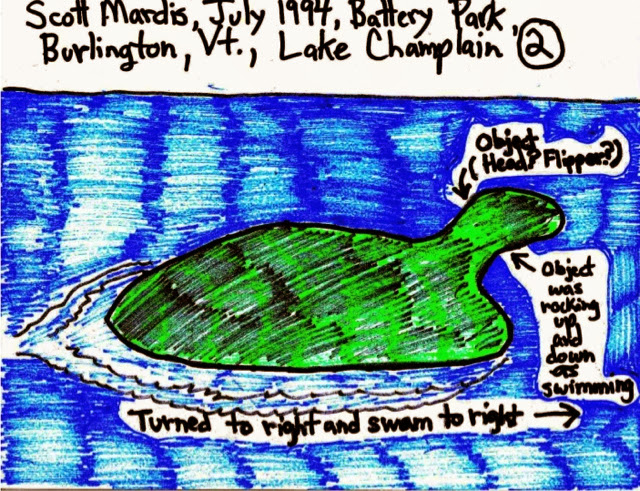 The full object began to swim or move to the right, with the smaller object making a rocking motion as this was happening. The smaller object could be interpreted as an appendage of some sort, possibly a head on a short neck or a flipper. The whole thing briefly swam a few yards to the right, then promptly sank vertically and I did not see it again. The entire incident may have lasted something like 30 seconds, if that. I did have a very good view of it through the binoculars.
The object was a greenish-black, "garbage bag" color, reminiscent of a leatherback turtle.
[JC: Scott desired that I note that the color of his illustrations is not as dark as the color of the object was, due to lack of ink.] 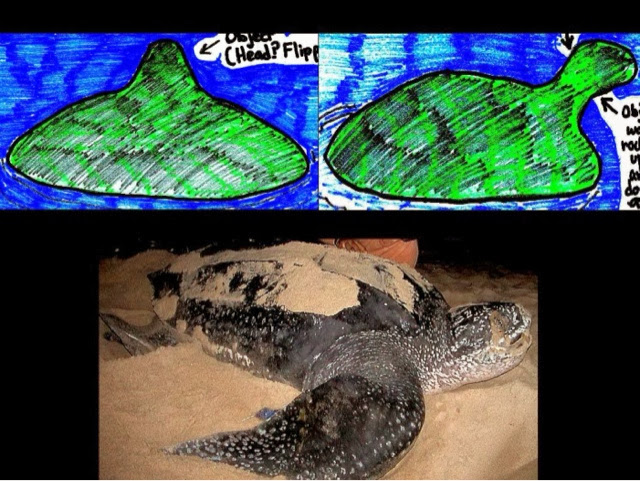 The final configuration taken by the object that I saw was reminiscent of the shapes seen of the object in the Eric Olsen Lake Champlain video from May 2009. 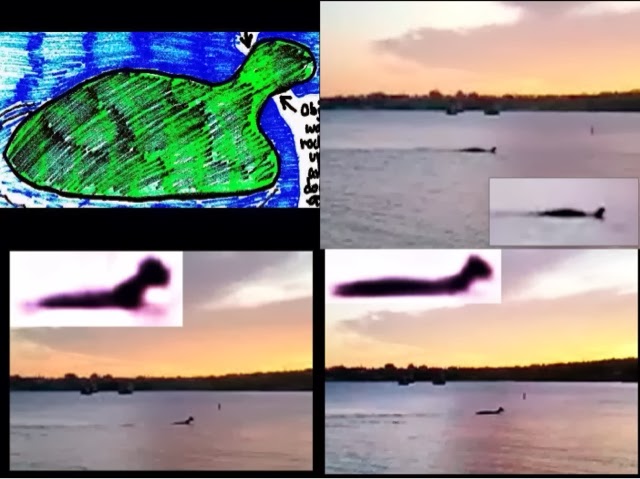 As far as the incident I witnessed, I am not aware of anyone else noticing it at the time and I did not immediately discuss it with anyone at the scene, as I did not know anyone there. I did shortly thereafter walk to a payphone and inform the local Channel 3 T.V. newsroom what had happened. They interviewed me the following day at the park for a news feature on "Champ", in which they interviewed several other recent eyewitnesses including Dennis Hall. After calling the newsroom, I immediately went home and made drawings of what I had seen while it was still fresh in my mind. The original drawings are in my archives in Vermont. The sighting is listed in Gary Mangiacopra’s book, "Does Champ Exist?"

This report form was also forwarded to cryptozoological researcher Dale Drinnon, who made some interesting comments on it (see his article here). He felt that this was an important sighting and that the smaller object sticking off of the larger object was likely an elevated foreflipper on the animal's side. Dale feels that the similarity of what Scott witnessed to the alleged creature of the Olsen video is spurious due to their different anatomical positions; a contention which I agree with. Interestingly, Scott's illustrations reminded Dale of a photograph allegedly showing an unknown animal in Loch Ness taken by F.C. Adams. Recently deceased biologist Dr. Roy P. Mackal felt that the photograph, which was taken in 1934, showed an unknown animal raising its rear flipper. In my opinion, the photograph is rather intriguing and does look like it could show a large animal raising a rounded
flipper with a blunt terminal end.
However, the possible flipper on the subject of the photograph is also very similar to the dorsal fins of some delphinids (dolphins and their relatives), as seen in the comparative image below. Bottlenose dolphins and Harbor porpoises are a common tourist attraction at the mouth of the River Ness1 and schools of porpoises have been reported at Loch Ness, supporting the possibility that the photograph shows a dolphin. Whatever the subject of the image is, it is unfortunately too ambiguous for a proper conclusion to be made. The photographed object has been compared to dolphins, floating chunks of wood, and even the famed Rines "flipper photographs", but each comparison lends to its inconclusiveness. Thus, the photograph may or may not have any relevance to the object which Scott witnessed. (Update: Investigator Dick Raynor has let me know that he has showed the photograph to marine biologists at the Lighthouse Field Station in Scotland who were of the opinion that it showed a dolphin. These scientists were working on a dolphin photograph-ID project which continues today.)

In my opinion, the object witnessed by Scott at Lake Champlain was quite possibly a longneck (a term used by cryptozoological researchers to refer to long-necked unknown aquatic animals) which was rotated onto its side and holding a flipper in the air. The appendage which later oriented on the right side of the object appears to be the foreflipper stretching forward as the animal swam away through a paddling locomotion (thus the rocking motion of the appendage). The vertical sinking of the object is a very interesting detail to me, as longnecks have often been reported to suddenly submerge in a vertical manner.2 Another detail which strikes me as intriguing is the manner in which the possible foreflipper was being held in the air. This was quite possibly an act of thermoregulation, similar to the "sailing" behavior of sea lions. These pinnipeds will extend their flippers into the air and face them toward the sun while floating on the surface.3 This allows their poorly insulated flippers to absorb heat which is then circulated to the rest of the body.3 It is noteworthy that some cryptozoological researchers such as Bernard Heuvelmans and Michael Woodley have hypothesized that the alleged unknown animals of Lake Champlain may be long-necked otariids, based off of reports and possible photographs. However, other animals such as plesiosaurs may have taken part in such thermoregulatory behavior. A relict plesiosaur also seems like a candidate which would fit Scott's sighting better given the features like those of a leatherback turtle, and Scott has even referred to his sighting when asked why he considers the possibility of relict plesiosaurs.
Whatever the object seen was, Scott's sighting is undeniably interesting, partly because of its location which has had a long history of longneck reports. As I have stated previously, intriguing evidence including the echolocation of an unidentifiable animal do make Lake Champlain one of the more evidenced of alleged unknown freshwater animal habitats. Although the brief observation period could be interpreted as support for the possibility of misidentification, I personally feel that the appearance and behaviors described make this report very compelling. In my correspondence with Scott Mardis, I have always respected his striving to examine every possible identity behind a report or photograph, and I thus feel that what Scott observed was very possibly an actual unknown animal.
As a sort of bonus, here is a video of the man himself briefly speaking about the plesiosaur hypothesis in regard to Lake Champlain. This clip is from the Chasing Discovery documentary. Yes, "plesiosaur" is spelled incorrectly in the title, but the video is still a good cursory review of the hypothesis. Hopefully further investigations into Lake Champlain will determine if it truly is the habitat of longnecks or not.