Update ~ Especially when dealing with data and views so circumstantial as those of cryptozoology, scientific lines of thinking are constantly changing. As my research delves further into the bizarre realms of zoology, my own thoughts have evolved substantially and will most likely continue to do so. I feel that this change does not reflect poorly on my own reputation but rather shows that I am willing to adapt my own hypotheses when met with contrasting data. With this having been stated, I have since come to disagree with some of the material presented in this article. The notion of the Hagan carcass as a primitive cetacean is quite tantalizing if the description is taken to be entirely accurate, and multiple other zoological academics such as Dr. Bernard Heuvelmans have written on the supposed persistence of archaeocetes. However, the presupposed gap in the fossil record necessary for such an occurrence contradicts our current understanding of paleozoology, with the bones of archaeocetes being much denser and more diagnostic than those of commonly cited living fossils such as the coelacanth. Anecdotal accounts of animal carcasses are also infamously poor, with decomposition often hindering the ability of an eyewitness to accurately record the animal's true appearance or identity. Nonetheless, I will leave the publication as it stands for the benefit of those interested. Please refer to this article for my more recent position on the Hagan carcass.

Thomas Finley, a cryptozoological artist and good friend of mine, has recently shared an interesting report with me and other researchers. This report involved the discovery of a carcass belonging to an unknown animal off the coast of Southern California by Julie Hagan. The event allegedly happened on April 20, 1978 in La Conchita, California. I had the pleasure of interviewing Julie Hagan about the occurrence on Facebook, and I have permission to share the details she gave me. Ms. Hagan described the unidentifiable carcass as being that of an aquatic mammal which had a body that was comparable in its bulkiness to that of an elephant seal. According to Ms. Hagan, the color of the skin was leathery and dark brown like that of a walrus, but was much darker and had little wiry hair. The animal reportedly had a blowhole and a flat tail like a dolphin. This carcass also had several unique features such as a large bite mark on its side, two sets of flippers (the hind flippers were firm and not vestigial), and a head which was described as having a flat, leathery "billed" snout like that of a platypus. Other than the large wound on its side, the carcass was fully intact, and Ms. Hagan feels that it had recently washed ashore. Julie was able to measure the carcass and estimated that its body was ten feet long, approximately four feet high, and possibly 3.5 feet wide. Julie also measured the length of the eyes from the blowhole, and found that they were approximately six to eight inches away and were slightly above the bill. However, Julie was unable to take photographs due to her absence of a camera and she did not take samples of the body because she could only think to use her senses to observe the carcass, due to her lack of tools for sample collection. Two other people also apparently witnessed the carcass on the beach but did not remove it due to its powerful odor, and it was reportedly last seen being removed from the beach by people from the local Santa Barbara Museum. Although the carcass was never publicly identified, it does share some features with a known species, although this species is not supposed to exist in modern times. 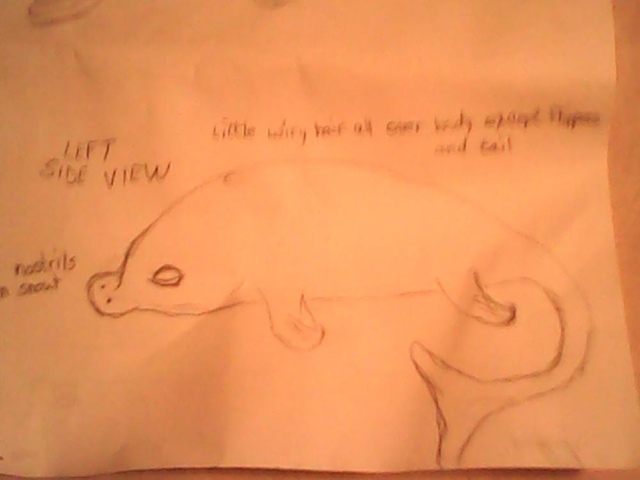 Before I reveal the candidate which seems to match the features best, it is important for me to note that I had originally suspected misidentification in this case, but upon further speaking to Ms. Hagan I gained doubts about that suspicion. I had suggested that she may have seen a beaked whale, which she rejected, and I also shared images of the infamous "Santa Cruz Sea Monster" (a mangled beaked whale carcass that was described as being 'duck billed') which she said did not resemble the carcass she saw. Her description of a cetacean-like animal which had four flippers and other features which caused Ms. Hagan to think that the animal was "kind of like a missing link between ocean mammals and land mammals", immediately made me think of an archaeocete. Archaeocetes were a group of primitive cetaceans which is made up of six families; from the earliest terrestrial cetaceans known as pakicetids to the ancestors of modern whales known as basilosaurids.1 Some of the fully marine archaeocetes retained four limbs, the lack of a dorsal fin, and a long snout while having developed a tail fluke and flippers. Although these features all bear similarity to the carcass described by Ms. Hagan, the marine archaeocetes still did not have a blowhole located in the same region as in the Hagan carcass. However, it is certainly possible that the Hagan carcass belonged to a species which retained the aforementioned features yet had evolved a blowhole (which could be expected if this is a relict archaeocete species). While the "billed snout" may seem to be an irregular feature for an archaeocete whale, this could certainly be an adaptation for a specialized diet such as seafloor organisms or may simply be a leathery rostrum. In my opinion, it is unlikely that the Hagan carcass was a relict member of any of the known archaeocete species as it does not perfectly match with any known form (unless it had evolved different features), but it is likely that it is an unknown offshoot of the archaeocetes lineage (if it was the carcass of an unknown animal). An alternative argument for the carcass having been a mutated beaked whale specimen which exhibited four flippers could be made, however, the animal had exhibited several distinctly non-beaked whale features. Although these features do reject the beaked whale hypothesis, researchers Cameron McCormick and Markus Hemmler have suggested to me that this is the most likely scenario and that Ms. Hagan may have misremembered features. However, Ms. Hagan had allegedly examined the carcass closely and was adamant that this was not the case. For now, we can only make speculations which may or may not have any accuracy.


In discussion with cryptozoological researcher Dale Drinnon, he suggested that the Hagan mystery carcass could have belonged to the same animal as the "Gambo" carcass allegedly found in The Gambia by Owen Burnham. This carcass was allegedly around fifteen feet in length with a girth of five feet and had two sets of flippers, a "beaked" snout which had a pair of nostrils at the end, a "domed" head, small eyes, no dorsal fin, a tail without a fluke, and eighty conical teeth.3 Although the location of the "Gambo" animal's nostrils and its absence of a tail fluke do not match with the Hagan mystery carcass, it is certainly possible that this was due to mistakes in Owen's observations or transmission, as he was fifteen at the time of viewing the carcass and his renditions were actually created after he had returned to the United Kingdom2. It is interesting to note that researcher Michael Woodley also speculated that the "Gambo" carcass could have been an archaeocete, and pointed out that the "sea serpent" reports which Bernard Heuvelmans classified as 'Marine Saurians' do match with archaeocetes.3 While the Hagan carcass may not have been synonymous with "Gambo", Dale and I both agree that the most likely explanation for it is that of a primitive cetacean (if the carcass did truly belong to an unknown species).
You may be wondering how a marine mammal species could have stayed unknown, only to have been witnessed as a carcass. However, an analogy can be made with the interesting cetaceans known as beaked whales. Even though some species of beaked whale are very large (some growing to the size of elephants), some species are only known from their beached carcasses and have thus never been positively seen alive.4 Some species such as the enigmatic Mesoplodon Species "A" and "B" are only known from recorded sightings, and further demonstrate how elusive these cetaceans are.5 Therefore precedents certainly exist for large marine mammal species being only known from carcasses or eyewitness sightings, and it seems that Julie Hagan may have been witness to a truly bizarre and unknown example of such an animal!  This was a great example of teamwork during a cryptozoological investigation between Thomas Finley, Dale Drinnon, and me, and I was proud to be a part of it. My sincere thanks go out to Julie Hagan for being so willing to talk about the unknown carcass she witnessed with me, and I hope that the animal she saw is discovered and classified in the near future (if it truly was that of an unknown species).